This was a short trip of only three days to Esbjerg and Fanø Island, Denmark by Lois on her own.  The plan was to visit Sønderho, a small village at the south end of the island, and the place where the Danish component of our family comes from.

The island is within the Wadden Sea National Park, which extends along to coastline to Germany and is part of this World Heritage Site.  The wildlife in the area is a huge attraction for biologists, conservationists and tourists.

Today Sønderho is a very pretty little place, attractive to tourists and very different from the fishing and boat building settlement of the 1800s when various great grandparents lived and worked in the village.

The whole island is basically a 13-15 Km long sand dune that is gradually being claimed by grasses, heathers and stumpy trees.  It is flat, with only small rises that provide only 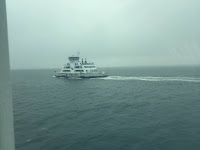 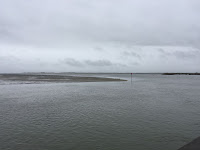 meagre shelter from the North Sea winds.  There is a lovely semi-sheltered area of sandy banks on the mainland side of the island where seals bask in the afternoon sun. So it is a windy place, with poor sandy soil and no hilly areas.  Life on the island for local inhabitants was hard 100+ years ago, with little farming to supplement the seafaring and fishing economy.  Today the island is known for its wildlife and fantastic long sandy beaches, much loved by tourists, especially on the seaward side.  It is a local tourist hot spot for Danish folk, easy to access via a short ferry crossing from Esbjerg every 20 minutes and there’s a bus that travels up and down the island that offers a reasonable alternative to car travel!

Sønderho village is small enough to walk around and see all the old thatched houses and notable points of interest in one afternoon.  The houses are quaint long buildings with small windows and thatched roofs, almost invariably only one storey high with perhaps one room upstairs with a window emerging from the thatch. 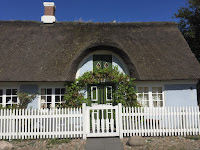 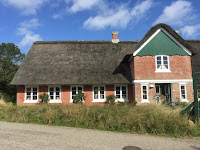 The outside walls are painted pale yellow, pink or white.  Some are brick colour with the outline of bricks added for effect!  There’s always a lot of pots and glassware inside on the window ledges placed especially so everyone can see them!  The folk here are evidently very proud of their homes.  Quite a few of the houses have pairs of Staffordshire pottery dogs showing in one or more windows. 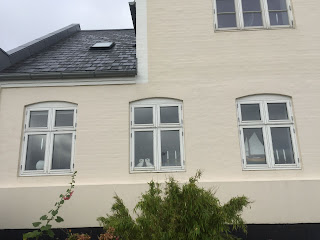 The story of these is that back in the 1800s the seamen would bring them home as souvenirs from their sea voyages to the UK delivering fish.  When the dogs look towards the inside of the house then the man of the house had returned safely from his sea journey and was at home with his family.  If the dogs were looking out of the window then the man of the house had not yet returned and was awaited.  It was never certain that the seamen would return home.  Many were lost at sea and many women became widows relatively early in their married lives.  The little church (kirk) at Sønderho gives testament to this by way of a whole series of model ships hanging from the rafters. 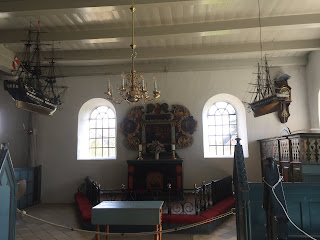 Inside the church space is light and airy, with blue painted pews and an organ at the back with long metal pipes standing proudly either side of a pair of windows. 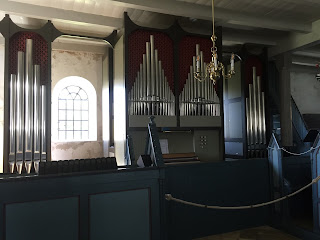 What an experience to visit a place where ancestors of three and four generations ago came from.  And an even greater experience to find evidence of them by way of a grave stone in the kirk grounds showing family members’ names.  This is family history coming alive! 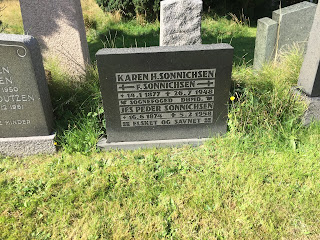 The points of interest at Sønderho worth highlighting include: 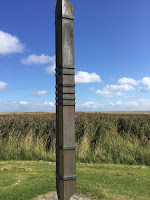 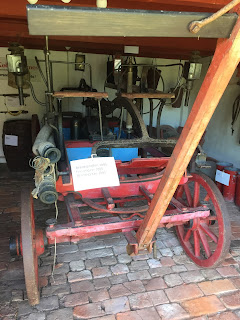 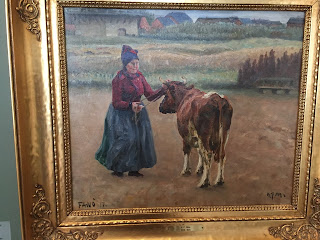 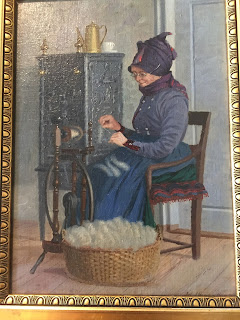 Was it worth visiting? – YES.

Esbjerg itself is a lovely place too.  The centre has been converted into a car free zone and 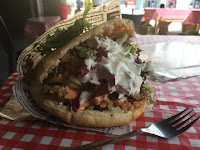 provides a lovely, peaceful set of streets for walking and window shopping.  It is full of high value clothes, soft furnishing and design outlets.  There are some pubs, restaurants and pizza shops and one street food outlet which serves a really good chicken and salad pitta! Folks don’t go around eating in the street here so there are tables and chairs on the street for people to use.  They are very restrained and very respectful of their cities and towns – there’s no litter!

There’s a famous water tower here that was built in 1897. 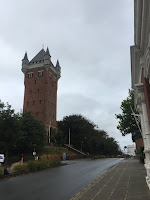 It is not in use any more.  It was designed by Hjerrild Clausen who had been inspired by Nuremberg’s Nassauer Haus.  It stands on a Bronze Age burial ground at the top of a cliff overlooking the harbour.  As a result, it has become the landmark of Esbjerg.

Esbjerg harbour was completed in 1874, after the loss of a northern port to Germany.  The port was needed to support the export economy of the Jutland area which comprised fishing, agriculture and shipping.  Today the port supports the wind-turbine industry and container shipping.  There are now several large port basins at Esbjerg!