Christmas 2018 and our first Christmas as retirees.  We spent Christmas itself in Edinburgh, then called in to Stirling on the way up north, then again on the way home!  So let's take those a bit at a time, shall we.

Christmas Eve was at the Edinburgh Christmas Market, which was lovely - if cold!  Edinburgh is a truly wonderful city... but is can suffer because it's starting to become a victim of its own success in that everyone wants to go there.  We'd heard some horror stories of the crowds at the Christmas Market this year, so went with a little trepidation at around 4:00 on Christmas Eve.  In fact, it wasn't so bad - perhaps the cold kept people away a bit, or maybe people are starting to learn that the crowds can be formidable and kept away.  Either way, it was quiet enough for squirrels to be gambolling about. 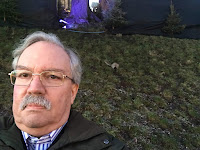 Sorry about the look on my face - I'm not good at selfies!  The point is that in the background over my left shoulder is a squirrel eating some discarded food it had found lying about. 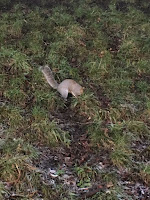 Here's a closeup to prove the point.
Anyway, bad seflies and optimistic wildlife aside, the atmosphere was just lovely and the food even better. 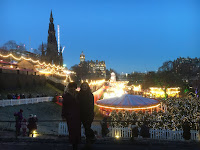 The pic on the left is of Lois and Hannah with the whole Christmas Market behind them and the Scott monument and the Scotsman Hotel as a backdrop.  It really was very nice indeed.

We positively feasted on exactly what we wanted - there was a lot of very diverse food available!  Ian had lobster and chips (I kid you not), Lois had salmon salad in soup (again, I kid you now) and Hannah had a large German sausage (perhaps no further comment is necessary).

We then returned to Hannah's flat in the Fountainbridge part of the city, to enjoy a traditional Christmas Eve movie - Love Actually - which was nice, before returning to the Leith Premier to bed.

The next day - Christmas Day - was a lovely day to start with.  We drove through to Fountainbridge and met up with Hannah, opened our prezzies and then went on to the Grand Cafe at the Scotsman Hotel for lunch.  We had decided to push to boat out a bit!

On arrival, the welcome was perfect.  Nothing gushy, just a genuine welcome, taken to our table, coats dealt with and drinks sorted.  All done professionally and with a lovely smile from everyone … and of course many “Merry Christmases” too!  Even though we got there and sat down about half an hour early (car parking was far easier than we thought - we easily got a space on Chambers Street - well worth remembering that there's a lot on on-street parking there except at Festival time when it's taken over for buses), the food was not long in coming.  Between us we had the crab and lobster salad and the roast partridge. 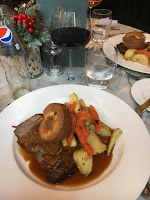 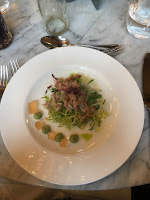 Both dishes were perfectly prepared and served.  To follow we variously had the roast beef and the halibut.  The fish was reported to be excellent but the roast beef, served very nicely with Yorkshires, potatoes, veg and gravy to die for, was perfect.  Goodness knows how they cooked it, but it was just wonderfully tender and tasty!  Then to finish we had Christmas pud, apple tart and cheesecake – again served beautifully.  All accompanied by good wine (at a sensible price). 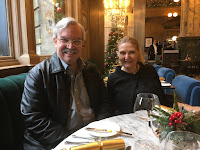 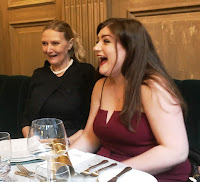 Now, you’ll read that and think “OK, looks nice but what’s so special”.  Well, special were the surroundings – marble and accoutrements and stuff which made “The Grand Café” properly grand - the fact that everything was done properly (no tacky Santas or cheap decorations) and above all the service.  The service was just great.  Our waitress was Sarah, and she was a real credit to the place, but she didn’t bring the food out.  Oh no – she supervised the food being brought out by another team.  Not had that before (maybe we don’t go to sufficiently grand establishments normally, which is true), but it worked really well … really well, such that everything that was supposed to arrive together arrived together rather than in stages.  Put those together – the food, the surroundings and a highly professional waitress – and you have the makings of a perfect meal.  And it was all of that.  Thank you Scotsman – we’ll be back again without question.

On Boxing Day we had breakfast with Hannah and started north, calling in at Bridge of Allan for tea and to see some old friends, Pete and Rachael, who were staying there with family.  That was a lovely break to our journey.