Down in Devon, down in Devon,
There's a village by the sea.
It's a little piece of heaven
And the angels call it Beer.

In many ways, this part of our post-retirement odyssey is the “biggest deal”.  That’s not to say that London or the Gairloch muirburning  are trivial, it’s just that this trip was LONG overdue (about 50 years, really) and it’s a long way away.  If you’ve read the last entry, you’ll know that we stayed at Honiton – itself a lovely little place – in a Premier Inn that was one of the best we’ve ever stayed in.  We’ll pop the tripadvisor review up if you’re interested.  But it was Beer that brought us to this part of the country.

A little background might be helpful to give context.  The family (Lois’ side) has been associated with Beer for a very long time.  We have a photo of her here as a baby, and she visited family here at about 13 too.  That was the last time she’d been (hence the 50 year overdue comment above) and she’d lost touch with that chunk of the family.  As you know, one of the aims of this odyssey is to get back in touch with family – so here we are.

A little about the area, then – it’s hung its hat on the Jurassic Coast peg.  There are lots of references to it, and with good reason.  There are loads of fossils to be found here.  No, it’s not a retirement village – far from it – it’s geological fossils I mean.   It’s a world heritage site, no less, so is alongside the Great Barrier Reef in that respect.  It has “proper” history.  Wikipedia says “The Jurassic Coast ... stretches from Exmouth in East Devon to Studland Bay in Dorset.  The site spans 185 million years of geological history, coastal erosion having exposed an almost continuous sequence of rock formation covering the Triassic, Jurassic and Cretaceous periods. At different times, this area has been desert, shallow tropical sea and marsh, and the fossilised remains of the various creatures that lived here have been preserved in the rocks.”  OK, we have to point of that 185 million years is a drop in the ocean compared with the 580 million years of the Lewisian Gneiss we experienced on Lewis and Harris, but for this end of Britain it’s not too shabby.  The QI fact you might remember is that Mary Anning, who supposedly inspired the song, came from here:

She started the fossil-hunting industry and, perhaps, inspired the new interest in this coast.   As an aside, two points - first, there isn't a lot of sand round here - it's mostly pebbles, and I prefer the Trini Lopez version to the Harry Belafonte one.

Beer, then, makes a lot of the pun that's available.  There’s plenty of plays on the word in the pubs there.  Let’s not hold that against the place which, in reality, is rather more grown up than that.  In any case, it’s only recently been called Beer – it used to be called Bera, Bearham, Byr, Ber and, remarkably, Brereworde.  I’d have stuck with the last!  Whatever it’s called it’s an absolutely delightful little fishing village.  They even still fish there – unlike many of the 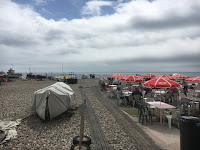 “pretty fishing villages” in the rest of the country that haven’t seen a fishing boat in years.  And you can buy fresh fish, which they still refer to as “wetfish” at the harbour.  There’s even a place where you can hire a deckchair – a proper wood and canvas one – for a pound a half day.  And buy an ice cream to eat in it too.  Or a cream tea, or a crab salad.  It’s just lovely.

Mind you, the notice erected by the harbour authority tells you more about what you shouldn’t do than what you could, but it still manages to be welcoming. Ish. 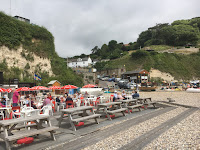 The place Lois worked by some 50 years ago, then called “The White Rabbit”, is now

“Ducky’s”.  It’s pretty much the same building, notwithstanding some repairs after year after year of storm damage.  The people who run it now didn’t remember her, but they’d only taken it over 25 years ago!

When Lois saw it, she recognised it immediately and we had a very agreeable cup of tea there.  Probably using the same crockery which was lovely and quaint. 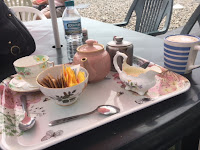 The village itself – and it really is a village at 1300 people, not like the village of Loughton which is more of a large town really – has all the makings of a thriving, community-led place.  It has a couple of nice pubs, some restaurants and not too much tat, which is refreshing.  One irony we saw was a shop selling buckets and spades for the beach – which given that it’s a pebble beach would be tough to use.  We wonder how many people buy them on the way down to the beach and try to return them later; they could use them elsewhere in Devon, I suppose.  But that was the only oddness we saw, everything else was just “nice”.  A particularly interesting sight is the stream that runs by the main street to the sea.  It runs in a stone gulley most of the way, crossing under the street through gullies from time to time.  It runs the length of Fore Street and alongside Sea Hill, then disappears underground.  Pooh sticks would be amazing here!

We had a lovely time here, not least the catching up with cousins over copious amounts of tea (thank you Carol) and cake (thank you Susan), being regaled with stories of derring-do (building and then crossing the Atlantic in a catamaran), the building of a full-size stone circle (I kid you not), stories filling the gaps in our history (not all wholly accurate, but I still stand by my completely inaccurate story of a relative losing a leg in the SOE!) and so on.  It was one of those afternoons that one didn’t want to stop – but it’s always nice to leave these things wanting more, isn’t it!
Posted by Ian and Lois Neal at 19:00