While we were here, we wanted to do a photographic copy of a portrait in oils that is part of Lois' family history.  The copy appears below together with a piece of explanatory writing.  It's published here for no reason other than it's quite interesting to us! 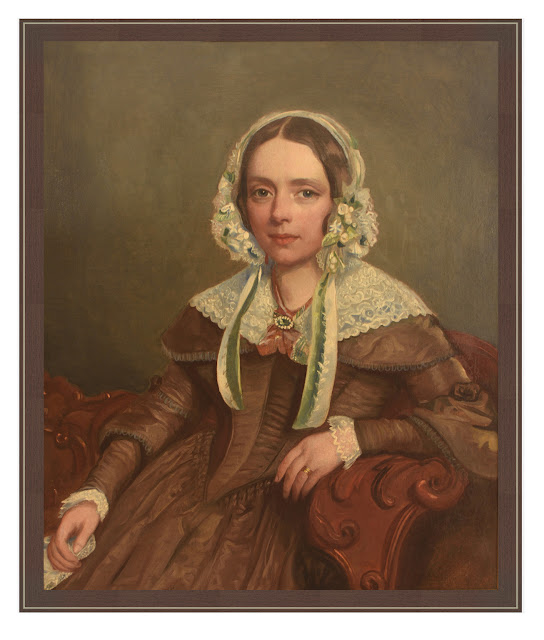 Ann’s father’s occupation is described as a “Plane Maker”.  This was a skilled occupation making woodworking planes of many shapes and sizes.  These were precision tools make up of wooden and metal parts and if not made accurately would make a carpenter's work impossible.

Ann is often described as a hat maker but could have been a milliner.  The terms milliner and hat maker (or hatter) are generally used interchangeably these days, but strictly speaking, a milliner makes women’s hats and a hat maker (or hatter) makes men’s hats.  We don’t know which Ann was; she is often described as a hat maker rather than a milliner but that might be because of the tempting alliteration in “Hat maker from Hoxton”.  The skills and techniques used in each, while overlapping are actually quite different.

James, the son of a butcher, was a chair-maker employing 5 men.  Chair-maker was a specialism of joinery, turning (for the legs and spindles) and basket weaving (for the seat and back).  Thomas Sheraton (one of the “big three furniture makers in 18th century London”) observed:
"Chair-making is a branch generally confined to itself, as those who professedly work at it, seldom engage to make cabinet furniture. In the country manufactories it is otherwise; yet even these pay some regard to keeping their workmen constantly at the chair, or to cabinet work. The two branches seem evidently to require different talents in workmen, in order to become proficients."

James carried out the business in St Pancras, London and died in 1850.

Since Ann’s father was a plane maker, presumably supplying tools to the woodworkers of that part of London, and James was a chair maker, it seems likely that Ann and James met through the woodworking trades.

Ann and James appear to have lived around the Holborn area of London – all the facts we have are based in Middlesex.  We know that after James’ death in 1850, Ann lived in Shoreditch; she is noted as “Head of Household” in the 1851 census.  She is also noted there as having the occupation of “Chair Maker”, so we can assume that she took over the business from her husband James.  She continued to employ 5 men.  Ann and James’ son, Joseph, continued the family vocation and is noted in the 1871 census as a “Master Chair Maker”.

The exact date of the portrait is not clear.  She looks young, perhaps around 19 or 20 when it was painted, which puts it at around 1830-32.  She appears to be wearing a wedding ring, but it is significant that the portrait is “of Ann Dabbs” and not “of Ann Chiswell”.  Ann’s father, as a skilled craftsman, would have been reasonably wealthy so perhaps commissioned the portrait for his daughter on her engagement or marriage.  Alternatively, the commission could have been made by her husband.  In any event the deep lace collar, lace fringed cuffs and her headdress were demonstrations of family wealth that would have been well understood and appreciated in those times.

The original oil painting, from which this photographic copy is taken, is currently held by Michael (Ann’s great-great-great grandson) and Carol Green in Devon.  For the last few generations it has been passed down the eldest female line as far as practicable, although that tradition couldn’t have started with Ann since she had no daughter.  Ann is Hannah Neal’s great-great-great-great grandmother.
Posted by Ian and Lois Neal at 21:00