Our visit to Loughton and Epping Forest

As well as touching base with valued friends and relatives in the London area, we were treated to a guided tour of places I (Lois) remember from when I lived here many years ago.

Justin and his wife, Joan, took us along the High Road from Buckhurst Hill to Loughton (the A121), through the “village” and passed the shops to the memorial and up along York Hill.

His aunt Mab lived at 21 York Hill and I visited regularly.  The house was called “Almahri”(almārī which is Hindi, via Portuguese from the Latin armarium meaning “closet or chest” – Oxford Dictionary) which we were informed was a Hindustani word that meant “cupboard” and presumably went well with their (Mab’s and Goldie’s) family names of  Mr & Mrs Hubbard.  This is Mab’s house in 2008, much as I remember it.

This is the back of the house.


Across the road from Mab’s house and over the grassed island was the edge of Epping Forest.  Huge trees, great leaf covered spaces and a fantastic space to walk around in as I recall.

Around the corner and up the hill is number 91 York Hill, which was where I lived with Mum and Dad early in my life.  In a much better state of repair and many years later (2018) number 91 looked like this.  Justin, who stayed with Mum and Dad for a week or so somewhere along the way, commented that the bathroom was always very cold in this house!!

The other side of the street is the edge of Epping Forest!

Justin continued the tour out of Loughton and round to High Beech in the middle of the Forrest and the King’s Oak hostelry.  The view of Enfield from the top of this hill over the road from the pub was quite something given that most of England, from Yorkshire to London seems so flat.

(This is a picture off the web so I’ve no idea who the folks in it are, but they give an idea of scale!) 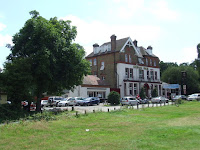 This is the King’s Oak

We had coffee from the café (the little place to the left of the pub) and followed the easy walk trail through the trees.  It was lovely.
Posted by Ian and Lois Neal at 15:52