West Dulwich ... and a tube journey

As the latest part of our post-retirement odyssey, we visited West Dulwich.  This was actually part of a visit to London which included mostly suburban towns such as Buckhust Hill and Loughton – but we’d been there before.  West Dulwich was new to us, and so, in this new era of our lives, was exciting!

Getting here was interesting – Circle and then District underground line to Victoria followed by a change to an overground train to West Dulwich itself.  It’s a while since we travelled on the tube in rush hour.  Previously, we’ve both visited central London for work but that tended to be arriving at King’s Cross at around 10:00 and then using the tube for onward travel.  This time we were earlier than that and it was horrible.  The Central Line train was packed and was very, very noisy.  It seems to us to have got a great deal noisier recently – we didn’t remember the rail noise being as bad as this before.  And the sway and shudder of the train was alarming.  Are they going faster now?  Or is this old age of either us or the trains?  We don’t know, but it was horrible.  What was even more alarming to us was the demeanour of the people on the train and the energies in the carriage.  We were reminded of some of the post-apocalyptic dystopian cities of the movies – except that this was more far-fetched.  Spirits were being destroyed here and we had it brought home to us why we like the north-east of England and north-west of Scotland.  We felt very sorry for Londoners who have to endure this every day.  In fairness, they probably are very happy living here and will find these comments rubbish … but this is our blog and we’ll speak as we find.  Changing to the District Line was better in that at least the trains felt like they would stay upright and  didn’t have a noise-level similar to a pneumatic drill … but the trains were still very crowded!

Then there was Victoria Station.

Victoria is one of those places that everyone knows about, but maybe doesn’t know why.  It’s on the north bank of the Thames so has a draft of fresh air blowing across it.  Of course, this being London we didn’t see much outside it, emerging from the underground and then going straight in.  We should have – this is an area of London that is surrounded by famous places … and the Palace of course; but we felt we needed to get out of London quickly.  The departure boards were fascinating – places like Penge, Chislehurst and Orpington ... this really was the world of Reginald Perrin!  We had to ask a couple of times where our train would go from and in doing so found something out about London Stations that we hadn’t come across before because we have only ever really experienced the big more or less single-operator mainline stations like King’s Cross and Euston – Victoria is a sort of “department store” of operators.  Bear with us on this…  In the old-fashioned department stores, one went into a big building and then found the department one wanted to buy something from.  Each department was separate – one couldn’t take stuff from one to another to pay for it.  You made your purchases from one department then move to another to make the next purchase.  So with Victoria – it serves Southern Railways, Southeastern Railways and the Gatwick Express.  Each of these appears to have its own platforms and has its own staff.  Each team of staff are very nice, and are helpful and welcoming, but don’t know anything about other operators except roughly where to find that operator’s team.  Me to a Southern Railways lady: “Excuse me, can you tell me how to get to West Dulwich, please.”  Southern Railways lady: “Sorry, I don’t know.  Where’s that? Is it out west?  Not one of ours.  Try over there (pointing to a different set of platforms).”

Having found the right area of the station – it was Southeastern Railways that we needed; West Dulwich is on the Orpington line - we then found one of our amazing new facts about London.  One can use an Oyster Card on suburban trains!  Not only that, when one does (so long at not too much time has elapsed) the journey is logged as unbroken between where one got on the tube and gets off in the depths of suburbia!  That makes the journey very easy – and a whole lot cheaper because the Oyster price cap hold the overall price down!  Amazing.  We’re not sure whether that made the whole torrid tube experience worthwhile, though – for us the idiosyncrasies and excesses of the Arriva buses charging policy isn’t so bad after all.

Then we got to West Dulwich. 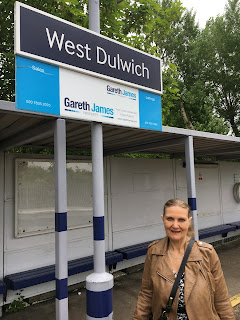 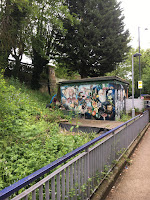 It’s a lovely little town, bisected by the London South Circular road.  Lots of trees and open space, not least because of the proximity to Dulwich College, an independent school for boys which seems to be quite affluent and has retained a lot of greenery.  That all makes it a nice place to walk through.  We were visiting friends here, a short walk from the station.  We came across this local artwork on the way
but we think that is not part of the Dulwich Picture Gallery which was the first public art gallery in Britain.

Here’s some blurb from Foxton’s local guide:
West Dulwich is an area in southeast London, that straddles the London Borough of Lambeth and the London Borough of Southwark. Croxted Road and South Croxted Road mark the boundary between London Borough of Southwark on the east and London Borough of Lambeth to the west. Best known for the respected Dulwich College, the Dulwich Estate is a relatively affluent residential area which has a sleepier feel to it than that of neighbouring areas such as East Dulwich or West Norwood. West Dulwich has two main parades of shops, the main one being on the Park Hall road junction, where Croxted Road becomes South Croxted Road. The other parade is on Rosendale Road which features more typical local shops. Dulwich Wood, Dulwich Park and Brockwell Park are all within walking distance of West Dulwich. Thurlow Park and Belair Park are by the south circular where it enters and leaves the area. Being so close to Dulwich Village means that there are many small pockets of greenery such as those on Park Hall Road, Rosendale Road and College Road.

That’s probably all there is to say.  We added West Dulwich to our post-retirement itinerary because we’d never heard of the place!  We now have visited … couldn’t have done that without being retired!  We also know some nice people here and for that reason, we’ll hopefully be back.